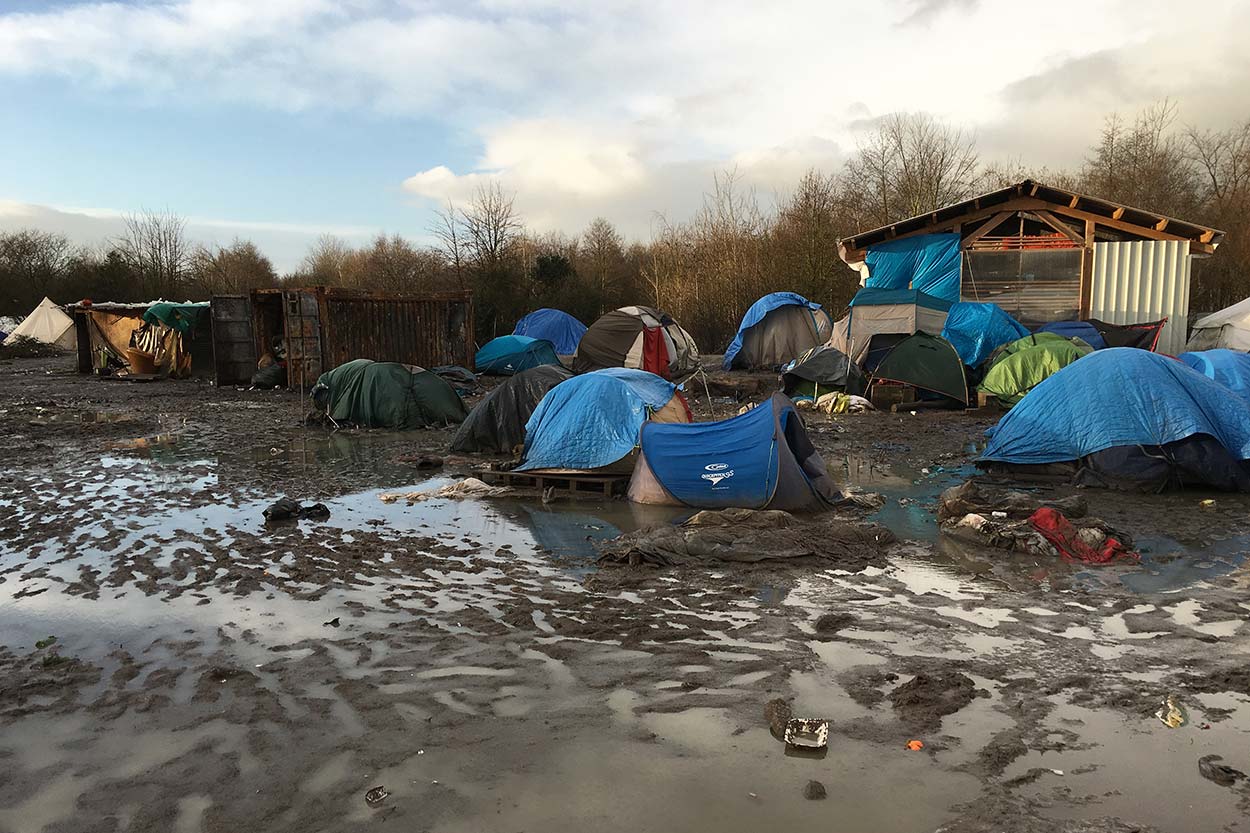 Conditions in the camp are grim – it’s a sea of mud, cold and extremely wet. A Lot of children and women, as well as families, but still overwhelming men.

The weekends are proving to be quite busy with volunteers – a French organisation was serving soup when we arrived and as soon as we had set up our kitchen in the same spot another volunteer group arrived to set up there kitchen right next to us . This was followed by two more food distributions all in the same area, so that at one point, 4 volunteer groups, including FoaM were distributing food. Needless to say there was a lot of food to go round on Sunday.

A lot of other volunteers in the camp, collecting rubbish and distributing clothing and toys, not on the scale that we’ve seen in Calais however.

ABC, proved to be a very useful contact on the ground and are coordinating to the extent possible in the camp, including the car park. They provided us (and others) with their passes to access the camp with our vehicles, but also a lot of useful info and advice. There is also another group with a permanent presence at the camp Carrefour Des Solidarite, didn’t meet anyone from the organisation, but did meet another group of volunteers who use a container on site managed by Carrefour (but owned by MSF) as a kitchen every Sunday.

Met with a representative of MSF, who also provided a lot of useful info on the new prospective camp, which they’re awaiting approval for. MSF also has good relations with the Mayor.

A lot of media presence also on Sunday – we were interviewed by ITV.

New Camp at Dunkirk
– Decision of local government to move the Grand Synth camp 800m away is still pending, although a decision was due on Monday (11th)

– MSF will be renting the land and constructing the camp, but not managing it. For this they are hoping to identify a group that will coordinate and manage – something along the lines of what la vie actif are doing in Calais I was told.

Coordination of assistance at Grand Synth

– ABC and principally Maddie and Phoenix, have a really good handle on the camp and are making a valiant effort at coordinating the different volunteers coming in. ABC meets weekly with the Mayor, who is empathetic to the situation (he’s a Green Party MP), but is constantly being blocked by the regional government.

– The other group that was mentioned as having a presence, but rivalry to ABC, are Carrefour – Des Solidarite – they manage a container on site that’s being used as a kitchen on Sundays, but could also double as a distribution centre

– MSF is there during weeks days, but there is no permanent medical presence during the weekends – that role is filled by ad hoc volunteers

– Swiss volunteers are there a few days out of the week, but chefs are principally Kurdish, making dishes that suit local tastes (they didn’t want our soup, but took the bread)

– They welcomed donations, but recommended checking in beforehand

– Kitchen also doubles as storage of items for new arrivals

– Joel, who met on our first trip has returned to Switzerland

– We should keep a track of developments regarding the Grand Synth camp and discuss what our role might be if any?

Public Relations - Family on a Mission